When we decided to embark on this journey, we were only sure of two things, we wanted to do the desert safari and we HAD to stay in those igloos we had seen so much on Facebook.  They looked so cool that we couldn’t resist.  So, we booked two nights at the Kakslauttanen Arctic Resort for November 29 – December 1, 2016.

I initially wanted to spend a week in Helsinki and then end our time in Europe in the igloo but there were no availabilities.  Every date that I wanted was all booked! I was freaking out but thankfully there were two days available at the end of November, so we changed our plans.  We would first go up to Lapland, the northermost region of Finland, see the northern lights, go down to Rovaniemi and visit Santa in the Santa Claus Village, and then go to Helsinki, capital of Finland.

Day 1: Getting to Helsinki

Getting to where the igloos are takes a bit more work than usual but it is doable.  After our time in London, we were going to fly to Helsinki.

The closest airport to the resort is Ivalo Airport and you have to fly there from Helsinki.  We stayed one night in Helsinki, packed our carry-ons with enough clothes for four days and left the next morning to catch our 9am flight to Ivalo.

Day 2: Getting to the Igloos

We didn’t want to travel with our 50lbs bags so we put them in a storage in Terminal 2A of the Helsinki Airport and traveled light.  Three nights of storage cost 36 Euro for two big bags and they are open 24 hrs, which was perfect for us.

After one hour of flying we arrived at the Ivalo Airport and it already seemed like we were in the North Pole.  Ivalo is in the arctic circle, so temperatures were very low. It was 19F/-7C and everything was white and covered with snow.  The resort is 30 minutes away from the airport and there are no taxis waiting outside.  We only saw a taxi service number in the airport door, so people could call if they needed one.  We didn’t want to take any risks so we had previously coordinated the hotel pick-up service and that was 25 euro per person.  As soon as we arrived, a hotel employee was waiting for us and took us to our corresponding village.

Kakslauttanen Arctic Resort is divided into two villages, East and West.  West is the original complex and East is the new side.  We were dropped off at the East Village and checked in.  We arrived earlier than the check-in time (3pm) but luckily our igloo was ready.  The views we got while walking to our igloo were spectacular.  Snow covered trees and wooden cabins, a frozen lake and glass igloos all around.  There are three rows of igloos on the East side and ours was on the last row, number 19. 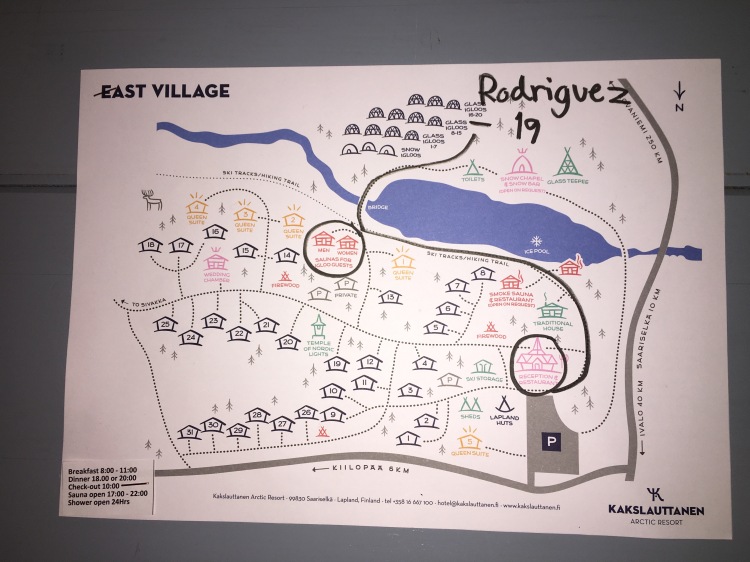 The anticipation was killing me.  Mom wanted to keep taking pictures but I just wanted to barge in.  I finally did and it was GREAT!  It looked exactly like in the videos.  I’ll never forget the moment I walked in.  I walked through the small door and the first thing you see are two twin beds side-by-side with zebra print bedding and red details in the middle of the room.  They’re set up so that you have the best view of the sky above.  The glass lets you have a 360 view of your surrounding and it’s heated so that the snow melts.  The room is also heated, the beds are soft and they recline for an even more comfortable night viewing.  Easy to say that I never wanted to leave that bed.  There’s a small bathroom at the front of the room.  The igloos don’t include a shower but there’s a small nozzle under the sink that easily worked as a tiny shower for us.  You can walk for about five minutes to another cabin that has showers and a sauna but honestly? Who would walk that far to take a shower in 20 degree weather?

Eventually, we changed into warmer clothes and headed to the restaurant for lunch.  Lunch was 22 euro per person and consisted of a soup and salad buffet.  But actually what that means is two types of soup and two types of salad.  So we had parsnip soup, shrimp salad, and some bread.  The ‘buffet’ also included tea, coffee or hot chocolate.  Breakfast and dinner are included with the room fee but lunch is paid seperately.  After we went back to the igloo, I took a nap while mom was on the phone, and then we left again for dinner at 8pm.

They give you two time options for dinner and you have to check-in to one of them or else, no dinner. It’s either 6pm or 8pm.  They give you options because many guests take night tours that usually begin at 8.  Dinner at the resort is a set menu and for our first night that was a tomato soup, chicken curry with vegetables and a side of rice, and mint ice-cream for dessert.

After dinner we anxiously went back to the igloo hoping to catch at least a glimpse of the Northern Lights.  It was our second time trying to see them (we tried to see them in Iceland in March) but the sky was so cloudy we weren’t sure we would.  We stayed up until 2am quietly hoping for a miracle but went to bed hoping that the next day would be better.

For our second day at the resort we had a reindeer safari booked.  Mom booked it directly through the hotel. Initially we thought we had booked a 2hr tour that included a visit to a Sami village (Finland’s indigenous people) and a 40 minute sleigh ride. It turned out that a mistake was made and we were signed up for a 2hr sleigh ride.  We didn’t think it was ideal but we believe that everything happens for a reason so we went with it.  Honestly, I believe we were lucky that it happened that way because the ride completely exceeded my expectations.

Our tour guide’s name was Penti.  He is a reindeer herder who lives in a Sami village with hundreds of reindeer.  He was funny and lively and told us everything about Sami life.  He prepared five reindeer to pull the five sleds that would carry the seven of us.  He let us borrow snow suits and anything else we might need to keep warm and then the ride started.  It was a moment of pure magic.  You sit warmly on the sled, covered by a reindeer skin and are gently pulled by these powerful and beautiful animals.  The reindeer sleigh ride is a slow and steady ride that takes you through untouched snowy terrain.  The views of tall pine trees covered in snow, the blue sky, the sleigh moving quietly through the winding snow paths was a sight to behold.  We inmensly enjoyed the ride, feeling at peace, breathing the fresh and clean air.  I was actually surprised when the tour ended. I didn’t even notice because I was enjoying it so much.  After getting off the sleigh we were taken to a teepee and given hot tea and snacks while Penti sang us traditional Sami songs.  It was a great experience and we recommend it to anyone who visits Lapland.  It’s truly worth it!

After our tour we were brought back to the hotel, had lunch, and went to the West Village.  Mom wanted to go visit the other village so we hopped on the shuttle that runs between the two.  The West Village turned out to be bigger and we were later told by other guests that many excursion buses are brought to this side for tours. The reception was bigger than the one on the East Village, their lunch menu included a few more options and on this side there is a Santa’s home (1.5 hour visit costs 90 euros per adult and 51 euros per child) and a Celebration House for events.  This side is also where the Kelo-Glass Igloos were.  These are special cabins that are a cabin and igloo combined.  We only had about an hour until the next shuttle so by the time we walked through the reception area and saw some of the other buildings, we ran out of time but at least we had some time to play in the snow.  There was a few feet of powdery snow and it was the perfect chance to make snow angels.

We arrived and went back to our igloo, which is honestly were I wanted to be all the time.  I loved being inside.  It was a such a rare and different experience, I wanted to be there whenever we could.  When you lay down on the bed all you see is the sky.  It’s like being outside without freezing or having to wear three layers of clothing.  Perfect.  And since the sun goes down at around 2:00 pm, you can start keeping an eye out for the Northern Lights early in the evening.  The suggested time of apperance is usually close to midnight but we heard some people say they had seen them at 9pm and even as early as 5pm.  We fell asleep waiting for the lights but got up for dinner.  I was so tired I went to dinner that day in my pjs… but you’re wearing so many layers that who can really tell? 😉

For our second dinner we had parsnip soup, beef and mashed potatoes, and berry ice cream.  We quickly ate and made our way back to the igloo hoping to see the northern  lights.  It was our last night!  We waited, waited, and waited.  It wasn’t snowing like the night before and the igloo glass was clean and clear, so we had hope!  It was still kind of cloudy that night so we didn’t get to see them that night either. 😦 That’s the thing about nature.  It’s totally unpredictable.  If the weather conditions aren’t right, you won’t get to see the light spectacle in the sky.  Nevertheless, staying at the igloo hotel was totally worth it.  You get to live in a Winter Wonderland.  You get to sleep surrounded by nature.  Even if we didn’t see the aurora borealis, we had amazing views of huge pinetress covered in snow surrounding our igloo.  It’s peaceful and humbling.  We didn’t catch the northern lights but we went to sleep truly happy that we got to have the unique experience of staying  at Kakslautannen Arctic Resort in Finland.